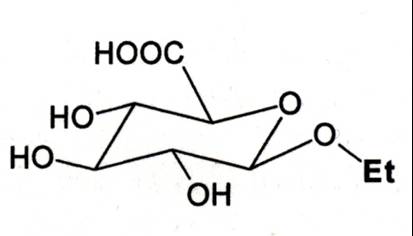 The courts in Nashville,Tennessee will require random drug testing if you are charged with a multiple DUI charge. It is a condition of your bail bond. Positive drug test could mean that your bail would be revoked pending the outcome of your case. The test also looks for Ethyl Glucuronide (EtG). I added the fancy symbol above.

EtG is a biomarker for ethyl glucuronide. It is basically a  method to determine alcohol consumption.Here is what the Substance and Mental Health Services Administration has to say about EtG testing;

The EtG test is simply not reliable by itself to determine alcohol consumption. According to the SAMHSA advisory:

"Currently, the use of an EtG test in determining abstinence lacks sufficient proven specificity for use as primary or sole evidence that an individual prohibited from drinking, in a criminal justice or a regulatory compliance context, has truly been drinking.

"Legal or disciplinary action based solely on a positive EtG … is inappropriate and scientifically unsupportable at this time.

These tests should currently be considered as potential valuable clinical tools, but their use in forensic settings is premature."

SAMHSA recommends that biomarker tests be used as a tool to launch a more extensive investigation into possible alcohol use, but not as a stand-alone confirmation

Here is the takeaway. Get a lawyer that can present a scientific defense to your case. I see over and over again motions to revoke bond based on a failed drug test. It is well documented about false positives and EtG testing.